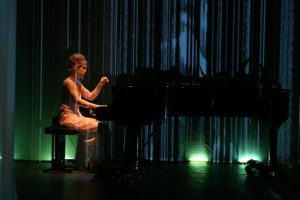 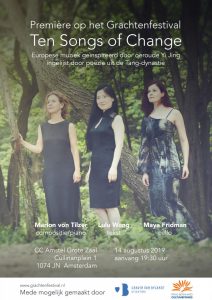 Ten Songs of Change Maya Fridman (cello, vocals), Lulu Wang (texts), Marion von Tilzer (piano & composition) The performance Ten Songs of Change is a Concert Poem. It is based on the Yi Jing, the ancient Chinese book of wisdom, possibly the oldest book on the planet. Like other monuments of human culture, it was a cooperative effort spanning many centuries. The oldest ideas in the book were probably handed down by the elders of nomadic tribes. These early authors observed the stars and tides, plants and animals, various cycles of natural events, as well as patterns of relationship in families and societies, the practice of business, craft of government and the grim art of warfare and the eternal human dramas of love, ambition, conflict and honour. And instead of creating a fixed chart of the cosmos, they put together a guide to the way things change: a fluid interconnected system of relations: the 8 trigrams and 64 hexagrams.∗ My inspiration for the music came from the emotional aspects attributed to the eight trigrams, which form the basic elements in nature. During the process of writing the music something special happened: the energy of each trigram I was busy with, appeared in various areas of my life. Through having such tangible experience of each trigrams enabled me to transform this experience in a very direct way into music. The order of the trigrams presented in our performance forms an entire cycle of day and night, as each trigram also represents a specific time of day. We begin and end at nighttime.

The text consists of two parts. One part contains poems mainly from the Tang Dynasty,written more than a thousand years ago. I have translated these poems into Dutch. The second part is my information about and interpretation of Yi Jing and the Tang-poems. Both the choice of the poems and my own text are motivated by my love for Yi Jing – Chinese call it ‘The Wisdom of Wisdoms’.

Although for me as author, it would have been logical to write my own text for this performance, I decided to use the poetry from one of the most glorious periods of the Chinese history – The Tang Dynasty. Even though it is not so easy to explain the Tang-poems from the point of view of Yi Jing, I still made an effort to do it, because I want to show the audience how deeply the Yi Jing has influenced the Chinese way of thinking and the Chinese literary expression.

If one day the earth decays and we all have to emigrate to another planet and if every continent can only take one cultural heritage with it, then China shall take calligraphy with her and Europe shall take music with her, I suppose. In my opinion, European music is unparalleled on this planet. I have to choose two superb items from the Chinese cultural heritage to go with cello and piano – a royal couple of the European music – and therefore I took Yi Jing and the Tang-poetry. The performance let the audience hear and experience how Europe and China rush into each others arms along a sixty minutes long rainbow. A rainbow built with music, poetry and the wisdom of wisdoms.

Ten Songs of Change is produced by MuziCan Foundation with the support of the Prins Bernard Cultuurfonds and the Gravin van Bylandt Stichting. ∗excerpt from the introduction to “The I Ching Workbook” by R.L.Wing